Door-to-door campaign with postcards, door hangers, virtual town hall – all addresses on Taney Street have been contacted in person at least 3 times 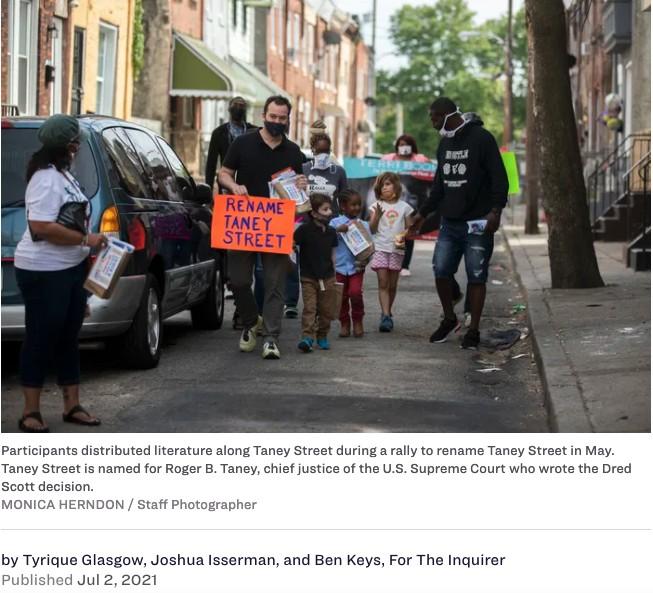 Shared ‘doorhangers’ & postcards at every household at least 3 times, and at half-dozen community events

solicited feedback by telephone hotline in addition to digital methods

89% of those on or within one block of Taney support

“Taney Street is my home, but I am embarrassed by its roots in White Supremacy”

“My block is diverse and vibrant, and the exact opposite of what Justice Taney stood for. My neighbors deserve better.”

All names suggested by residents

97.3% of those participating support renaming

99.4% of those participating support renaming 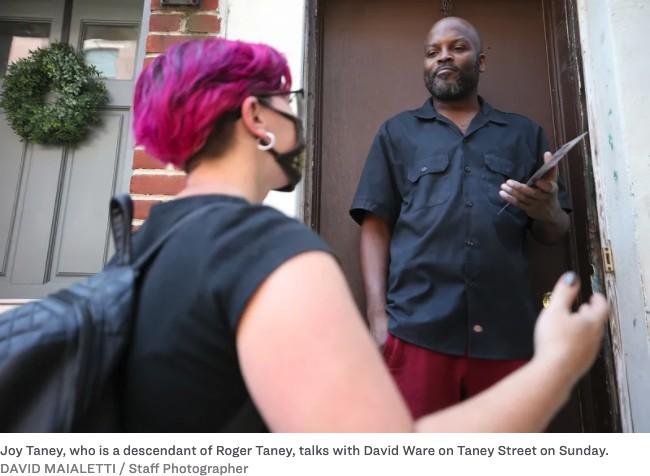 Spring 2022: Councilmember Johnson goes on the record that he will introduce legislation that council session. Coalition begins letter writing campaign to CM Clark’s office to obtain his necessary support for the legislation to be voted on. To date over 100 letters and phone calls were sent in support of Renaming Taney on our behalf.

Coalition meets with CM Clark’s staff to showcase that we have completed a through civic engagement campaign and have the necessary community support. Coalition asks for CM Clarke support to place the matter on the spring’s legislative session. Coalition is told CM Clark will review efforts and be in touch.

Coalition member Ben Keys sends Clark’s office another email April 25th after speaking with Rick Gross from CCRA that legal counsel Mary Jones had spoken of the matter and again asked how we can help move the matter forward.

Summer 2022– Coalition is interviewed by Cherri Greg from NPR and a documentary crew from NPR Canada for separate projects (*interviews have not been published yet).

CM Clark legal Counsel Mary Jones states that Clarke wants the coalition to get a petition with a supermajority of residents living on Taney St in the 5th district, showing they, both understand what a name change means for them, as well as support of what the new name will be. The Coalition responds explaining that the ask was not possible due to covid, man power, and the logistics of obtaining that but again outlining the comprehensive engagement process, and reiterating that we had worked diligently with Councilmember Johnson to develop the process we undertook, including outlining what an official street name would entail for residents and again provided a copy of this to her.

Coalition plans and executes another pass of signature gathering along Taney Street in the 5th District. Earning more media coverage, additional support from businesses along Taney St including Over the Moon Philly. Obtain additional earned media via a news story on CBS news and in the Billy Penn.